There are several types of central venous catheters:

Tunneled catheters are passed under the skin from the insertion site to a separate exit site, where the catheter and its attachments emerge from underneath the skin. The exit site is typically located in the chest, making the access ports less visible than if they were to directly protrude from the neck. Passing the catheter under the skin helps to prevent infection and provides stability. Commonly used tunneled catheters include Hickman catheters and Groshong catheters. 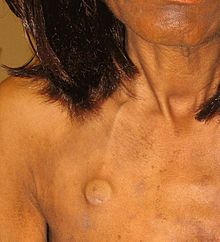 A port is similar to a tunneled catheter but is left entirely under the skin. Medicines are injected through the skin into the catheter. Some implanted ports contain a small reservoir that can be refilled in the same way. After being filled, the reservoir slowly releases the medicine into the bloodstream. An implanted port is less obvious than a tunneled catheter and requires very little daily care. It has less impact on a person’s activities than a PICC line or a tunneled catheter. Surgically implanted infusion ports are placed below the clavicle (infraclavicular fossa), with the catheter threaded into the right atrium through large vein. Once implanted, the port is accessed via non-coring “Huber” needles inserted through the skin. The health care provider may need to use topical anesthetic prior to accessing port. Ports can be used for medications, chemotherapy, TPN, and blood. As compared to CVC or PICC catheters, ports are easy to maintain for home-based therapy.

Ports are typically used on patients requiring only occasional venous access over a long duration course of therapy. Since the port must be accessed using a needle, if venous access is required on a frequent basis a catheter having external access is more commonly used.

A peripherally inserted central catheter, or PICC line (pronounced “pick”), is a central venous catheter inserted into a vein in the arm rather than a vein in the neck or chest.

The catheter is usually held in place by an adhesive dressing, suture, or staple which is covered by an occlusive dressing. Regular flushing with saline or a heparin-containing solution keeps the line patent and prevents thrombosis. Certain lines are impregnated with antibiotics, silver-containing substances (specifically silver sulfadiazine) and/or chlorhexidine to reduce infection risk.

Specific types of long-term central lines are the Hickman catheters, which require clamps to make sure the valve is closed, and Groshong catheters, which have a valve that opens as fluid is withdrawn or infused and remains closed when not in use. Hickman lines also have a “cuff” under the skin, to prevent bacterial migrationand to cause tissue ingrowth into the device for long term securement.

Indications for the use of central lines include:

Central venous catheters usually remain in place for a longer period of time than other venous access devices, especially when the reason for their use is longstanding (such as total parenteral nutrition in a chronically ill patient). For such indications, a Hickman line, a PICC line or a portacath may be considered because of their smaller infection risk. Sterile technique is highly important here, as a line may serve as a porte d’entrée (place of entry) for pathogenic organisms, and the line itself may become infected with organisms such as Staphylococcus aureus and coagulase-negative Staphylococci.

“Text is available under the Creative Commons Attribution-ShareAlike License Wikipedia.  Wikipedia® is a registered trademark of the Wikimedia Foundation, Inc., a non-profit organization”.

Living with cystic fibrosis means that sometimes you will need IV antibiotics to fight off infections.  Over time, your veins may get exhausted and not able to tolerate a peripheral IV (in your arm).  I have had many different types of the venous catheters listed here...I have had a PICC line, and Intra Jugular Line and I now have a Portacath.  When the time comes to make the decision, please do your research.  I found that the PICC line worked well for a while but I needed a more stable, long term access and ended up with a Portacath.  The Intra Jugular Line was my least favorite - but I only needed it for about 6 weeks so that was fine.  Pain scale here relates to insertion...I also go into each catheter in it's own entry.  Watch my video "Claire's Tips - Relaxation 101" for little tips on things I have done to stay calm before a potentially scary or painful procedure.

How to manage the pain